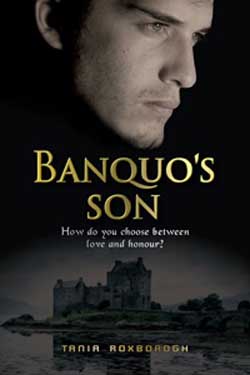 A Crown of Blood and Honour (book 1)

I have been teaching Shakespeare for twenty years (and first discovered him at high school - yay). I've always wondered what happened after the play 'Macbeth' ended. It has been a question I've posed to my students and myself many times. I have also been writing for about fifteen years and, with over twenty books published from a range of genres (YA, plays, English text books, texts of Shakespeare, parenting etc etc), I thought I would finally throw myself into this project. So, what did happen after the play ended? You might think there was no one left of any interest but one character came so vividly in a dream to my one night, I knew I had a story - and a big story it was going to be.
This is the story of Fleance, Banquo's son, who escaped Macbeth's attempt to murder him. The novel begins ten years later in the northern woods of England where Fleance has been living, not revealing to anyone who is truly is. He is madly in love with Rosie but, just recently, he has been having terrible dreams and visits from his dead father reminding him that the last words Banquo uttered before he died were "Fly, good Fleance Fly that thou may'st revenge."
What's a boy to do?

“Yet my heart
Throbs to know one thing: tell me, if your art
Can tell so much: shall Banquo's issue ever
Reign in this kingdom?”
Macbeth, Act IV, Scene I

As Macbeth was posing the frantic question above to the Three Witches, the murdered Banquo’s young son, Fleance, was running for his life through the forest toward England. As a child of ten, ruling Scotland was less a priority to him than surviving the night. It is now ten years later, and Flea (as he is now called), is living in England, no longer a child. He has been raised by a stolid but loving family; has a beautiful first girlfriend, Rosie; and an empty heart that will not be satisfied until he returns to Scotland to meet his destiny.

It is filled with knights, battles, damsels (in distress and otherwise), the treachery of court and the desires of ambitious men. There is a hero you love, and another you mourn. Flea meets up with kings and Pretenders, makes alliances and sees terrible treachery. He fights to keep Rosie even as circumstances (and her father and Flea’s inability to ever say the right thing to him) keep them apart; and he is drawn to the lovely and virtuous Rachel, sister of his best friend (and King of Scotland) who may be more appropriate as a future wife for him. Flea grows up too quickly during the course of BANQUO’S SON, and his destiny remains tied to Macbeth’s frantic query to the Three Witches.

Roxborogh’s characters are complex; the emotions are real; the friendships, love affairs and heartbreaks transcend the 11th Century exactly as they should. It is absolutely clear that this is a book, and a series, with the potential to break through into the zeitgeist.

BANQUO’S SON, Book One, was published to great acclaim in New Zealand in 2010 by Penguin NZ. Her editor there just sent me an email from the buyer of one of New Zealand’s top chains, which went like this: “It is very, very, very good, and a very exciting piece of publishing, exactly as you said. I‘m really grateful to have had the chance to read it this far out and reckon we can do something very high impact with it… thanks again, and well done! No wonder you’re proud of it.” It was shortlisted for the NZ Post Children’s Book Awards, 2011 and won the inaugural YA award in the 2010 LIANZA book awards.

In 2015, the series was re-published internationally by Thomas & Mercer in the UK. The trilogy has been renamed 'A Crown of Blood and Honour' and the books have undergone some minor changes/improvements. The audio books are performed by Napoleon Ryan and produced by Brilliance Audio.

BLOODLINES, (A Crown of Blood and Honour book 2)

'Do not feel guilty that you do not love me like her.  Our union will be another story, Fleance.  I will be a good wife and an excellent queen.' Fleance is the new king of Scotland, but he is the ruler of a divided nation. According to his advisors he must marry a woman from a royal bloodline to strengthen his position.  It seems that Rachel, sister of Fleance's dead friend King Duncan will be the next Queen of Scotland, although Fleance cannot forget Rosie, his first love. But when Rachel is abducted, Fleance's position becomes even more dangerous and a bloody civil war seems inevitable. Love and duty collide in this gripping tale of valour and betrayal. The epic story that began with Banquo's Son continues. (shortlisted for the 2011 LIANZA book awards) 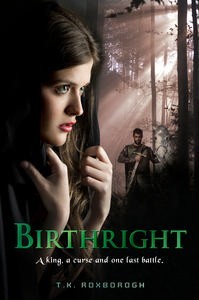 Birthright is the heart-stopping conclusion to T. K. Roxborogh's epic Banquo's Son series. Fleance, King of Scotland, has made a political marriage to Rachel, the sister of dead King Duncan. It may seem that happiness is not far around the corner with a royal baby expected, but things are far from peaceful in the realm. The young king and queen must dodge daggers in hallways and hold together a nation swept by a savage rebellion and a mysterious illness. And Fleance is still haunted by his first love, Rosie, now married to one of his most trusted friends. Can he keep the throne of Scotland when treachery is around every corner? A storm is brewing and soon the nation may experience the biggest battle in its history.

All three books have been awarded a Storylines Notable Book Award and listed in the NZ Listener’s top 50 books for teenagers.

Click on this link to buy the books here

Go here to view the launch of Birthright: